In 2019, the Innovations in Politics Institute tasked me with the creation of a “Call to Action” promotional movie for the awards that would be hosted in Berlin in December of that year. I contacted german film company Sympathie Film and following a script provided by the client, we worked out a concept for the movie, to be shot in front of Brandenburg Gate for the proper effect. Sypathie Film was in charge of the shoot, while I oversaw the overall production, mediated between the client and them and curated the actors, who actually appear in the film.

I am pleased to say that the clients were very happy with the result and the film can currently be viewed on the Innovations in Politics website, as well as their official Youtube Channel.

Curating a comedian for the Award Gala 2017

In 2017, I was tasked with curating a comedian to act as counterbalance to the more serious topics discussed at the first Innovation In Politics Awards in Vienna. In order to lighten the tone of the event, a proverbial “court-jester” was needed to introduce the notion, that the awards are self-aware enough to allow for criticism, new ideas and even lampooning. After all, the idea is to innovate rather than to stagnate.

I provided a short-list of 20 european comedians I found suitable. I chose them on the basis of performance, whether they had political jokes in their arsenal and obviously, whether or not I found them funny. After discussing my findings with the IIPA-Team, we decided on three preferred candidates, which I contacted. Mr. Ahir Shah agreed to the gig, and my job then progressed to facilitating his arrival, stay and provide him with basically anything he would need in advance or during his performance. 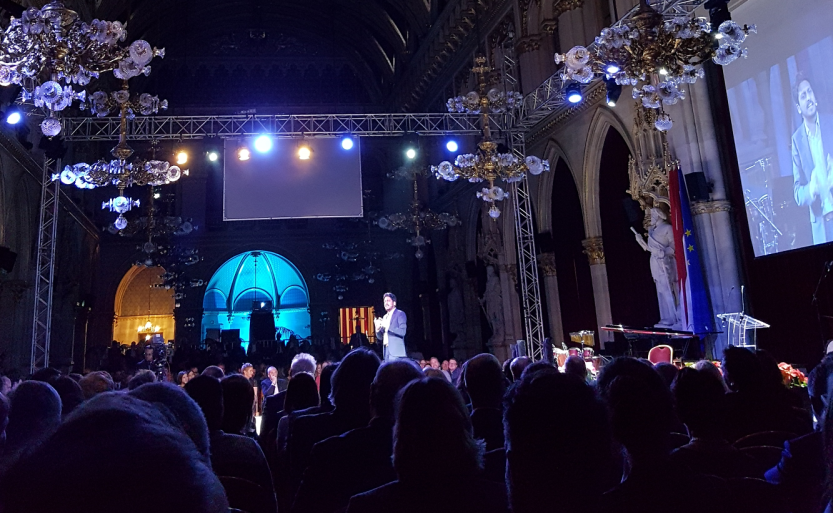 To many guests, including myself, Mr. Shah was one of the many highlights of the gala and his performance was greeted with a very positive reaction.